This is the follow-up to last week’s post on fuck-you money (which, quite fittingly, got me into my first ever personal finance blogger feud!) Note that this post will probably make more sense if you’ve read Part I.

If you ever need a refresher on the importance of fuck-you money, go peel off a $100 bill, and subject yourself to the silent, brooding judgment of Benjamin Franklin.

The side-eye is so doleful it traverses time and space. It’s almost as if Franklin knows his face is about to be a) rolled into a tube and stuck up some degenerate’s nostril, or b) used to purchase another superfluous piece of junk that will, in short order, be discarded upon a mountain of previously purchased superfluous junk.

Franklin’s not mad; he’s just disappointed. He wants us to be better. One of the most revealing stories about his character is the time he was offered a lucrative sum to print a defamatory hatchet-job. Here’s the process he went through to decide whether or not he should publish it:

“I went home in the evening, purchased a twopenny loaf at the baker’s, and with water from the pump made my supper; I then wrapped myself up in my great-coat, and laid down on the floor and slept until morning, when, on another loaf and a mug of water, I made my breakfast. From this regimen I feel no inconvenience whatsoever. Finding I can live in this manner, I have formed a determination never to prostitute my press to the purposes of corruption and abuse of this kind for the sake of gaining a more comfortable existence.”

In a similar fashion, the Stoic philosopher Seneca used to deliberately practice poverty, despite being the richest man in Rome. Every now and then, he’d spend a few days sleeping on the floor, eating bread and water, and traveling roughly. The idea was that should his fortunes ever change, he would accept his fate without complaint or compromise:

“Ask yourself, is this what one used to dread?”

Lest you think Seneca was just a pretentious asshole—the old-timey equivalent of celebrities who sleep ‘rough’ one night to raise awareness for homelessness—the man took his principles pretty seriously.

When Nero sent men to order his death, Seneca didn’t protest, or plead for his life, or flee. Instead, he calmly cut his own wrists. The blood wouldn’t flow, so he followed Socrates’ example and drank a cup of hemlock. Being a hard old bastard, he still wouldn’t die, so he finally had to suffocate himself in the bathtub. While his friends were quite naturally a bit upset by this grim spectacle, Seneca used his last breaths to gently scold them for being cry-babies.

By contrast, I am a little weasel. If a deranged emperor threatened my life, I would say, ‘Yes Mr Nero sir, I’ll have their head on your desk by morning.’ Perhaps we petty mortals can only tiptoe between the legs of these historic demigods. At least we can tiptoe in the right direction. Every man has his price; I just hope mine will be a little higher than most.

The great appeal of the Stoic philosophers is that they weren’t a bunch of finger-wagging ascetics in sackcloth and ashes. Epictetus worked his way out of slavery; Seneca was fantastically rich; Marcus Aurelius was the most powerful man on the planet.

The way they saw it, there’s no conflict between furthering your own self-interest, and doing the right thing. It’s all one and the same. Getting rich is great, so long as you’re ready to have your material comforts stripped from you at any moment, and don’t whinge about it when it happens. Whatever life throws at you, you shrug your shoulders and get on with the job.

Stoicism adds a whole extra dimension of fuck-you, which can only be expressed through the ancient medium of galaxy brain memes: 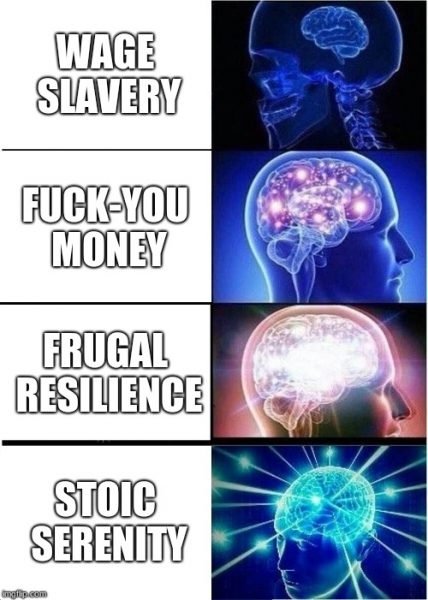 The 4 Levels of Fuck-You

Let’s recap each of the four levels:

If you’re a worker with expenses that consume all your income, about all you can do is whisper ‘fuck you’ under your breath; as impotent as a castrato choir. If you’re in debt, the situation is even worse—you have negative optionality. This is the status quo for most people.

If you have some cash in the bank, you can start to say ‘no thanks’ to a few people and situations, without rocking the boat too much. This is a worthy goal, but it’s not that powerful in and of itself.

If you also keep your expenses low, you can boldly say ‘fuck-you’ to many more people, at a considerably louder volume. Simple living means you tend to stack up savings without even trying, and your stash will stretch much further in the event that you need to use it.

I could always use more fuck-you money, and I intend to keep my tastes as simple as possible. As discussed last week, these strategies are underrated, but they’re not the last word in personal freedom.

What if you lost your health, or a loved one, or your reputation? Personally, I’m nowhere near level 4. I have recently discovered that I wouldn’t deal with these kind of things very well.

Life is terrifyingly random. The only way to face it with any shred of dignity is to train yourself to embrace your fate. It’s not enough to be able to say ‘fuck-you’ to any person, or company, or situation.

If you build up enough Stoic serenity, you get to throw back your head and gleefully yell ‘FUCK YOUUUUUUU!!!’ at the entire freakin’ universe.

Now that sounds like a goal that even Ben Franklin would be proud of.

The public library will loan you these books for free. If you’d rather buy them, use the links below to send a few pennies to support this site, at no extra cost to you (read more here).

Thoreau is the perfect embodiment of fuck-you frugality. I’m currently re-reading Walden, which is the story of how he deliberately turned his back on society to live out his little cabin fantasy in the woods. Some of it is boring and snotty, but the nature writing is world-class—an entire essay devoted to a battle between warring black and red ants—and it’s full of delightfully contrarian broadsides and sassy one-liners: “I have lived some thirty years on this planet, and I have yet to hear the first syllable of valuable advice from my seniors.”

Letters From a Stoic — Seneca

Where most 2000-year-old philosophy texts are a grind, this is basically a collection of letters from your cool eccentric uncle. It might have been written yesterday, and every line is either funny,  thought-provoking, or both. William Irvine’s primer A Guide to the Good Life is a great introduction if you don’t want to dive right into the original texts. I’ve also heard good things about The Daily Stoic, although I’ve only had the chance to flick through it so far.

A Man in Full — Tom Wolfe

Tom Wolfe died earlier this year, which reminded me of A Man in Full. It almost reads like an alternate history today, in which the Trump-like main character—an aging real estate tycoon—slowly finds salvation. Nice dream! The recurring themes are all about putting duty ahead of money and comfort, with lots of badass scenes of stoic fortitude worthy of Seneca.

Skin in the Game — Nassim Taleb

Taleb has optimized his life to talk the maximum amount of shit about people and institutions he doesn’t like, which are many and legion. His latest book is as infuriating and bombastic as ever, but he always delivers the goods. This installment contains various useful heuristics for navigating uncertainty, an entire section on fuck-you money, and a convincing argument on the importance of taking risk for your opinions (the titular skin in the game).

I skimmed a fair amount of the politics and revolutionary war stuff, but Franklin’s life was more than interesting enough to justify this fat biography: he was a scientist, inventor, writer, publisher, PR expert, social gadfly, and apparently also a Founding Father of some country or other. Relevant to our interests, Franklin was a champion of the virtues of frugality, and there are lots of inspiring little anecdotes like the one I mentioned in the post.

I am probably somewhere between 2 and 3. Couldn’t imagine getting to number 4, but like the aspiration! those stoics were hard core!

Richard Meadows
Reply to  The CFO

Awesome. Yeah, it’s hard to imagine being that badass, but it’s inspiration to at least try and move in the right direction!

Easy come easy go. i have fuck you money due to living in my car and eating beans but one thing has developed… Gambling! I’m doing my best not to become degenerate gambler, but as it turns out I keep winning because I just don’t care if I lose. It’s a slippery slope and I’m fighting to stay attached to society.. Man I’m always putting up walls for new stuff that might disrupt my rich mans poverty. How do you cope with these issues Rich?

Hey Andy, good to hear from you. Man, that’s a tricky one. Personally, I just got lucky, in the sense that I haven’t developed any major vices that might threaten my ‘rich man’s poverty’ (great phrase by the way). If you’re fighting to stay attached, and you see attachment as something worthwhile, maybe it would be worth looking into a lifestyle change that actually closes off some of your options? (i.e conventional employment, accommodation, relationships). One thing I am learning is that sometimes, constraints can be liberating too- and they chafe a lot less when they’re self-imposed.

Yeah good call about self imposed discipline, convention and constraint. Like Kanye says we buyin our own chains. Unfortunately more often than not though hanging out with solid citizens in Auckland means spending up large. Il buy a plastic chain so I can break out again easily.. I can’t wait to get back on the road, where it’s ok to be on a budget

Dang! I never knew Big Ben was giving me the stank eye until this post! Then I had to check. I’m with you when it comes to level 4. But at least I’m well removed from wage slavery!

It’s almost like his eyes follow you across the room…
Even being past level 1 is pretty great, since my guess is that a majority of people are stuck there for life.