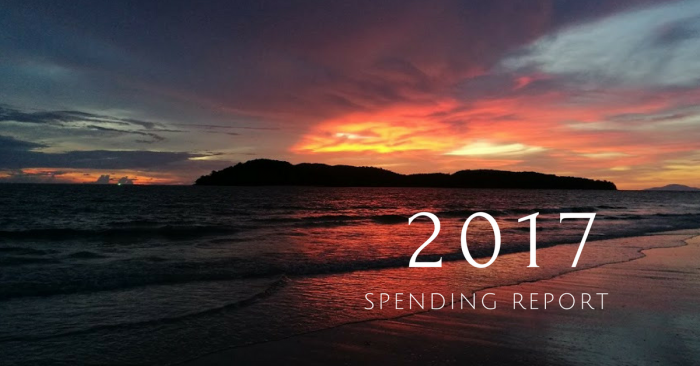 Step one was to build myself a spreadsheet. Blank columns were soon crying out to be filled, and I started tracking and categorising every last cent, baht, rupee or ringgit that left my pocket.

I’ve logged every rickshaw ride, every water refill, every bowl of noodles. Nothing escaped the merciless conditional formatting of my spreadsheet, which blazed a furious red whenever I overshot my daily or monthly spending targets.

Now I’ve got an entire year’s worth of spending data in front of me, and it’s crunch time.

Close, but no cigar!

I’ve known since November that I probably wasn’t quite going to make it, but I’m still pretty stoked with how things turned out. That $10,654 has stretched a reaaaally long way: I’ve hiked across the Himalayas, been surfing in Bali, diving in Thailand, and never denied myself anything I really wanted. More importantly, it also bought me complete agency over how I spend my time.

This is definitely the best quality of life I’ve ever experienced, for the least amount of money I’ve ever spent. I’m pretty sure I could happily keep living like this for several years, and it’s reassuring to know I could get by on even less if need be.

Here’s how the spending breaks down: 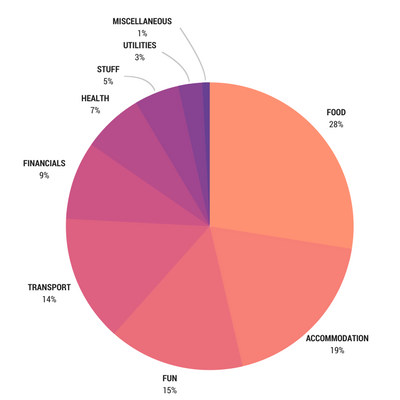 Food was far and away my biggest expense, which I didn’t expect. It has been hard finding veg-friendly street food, so I guess I’ve probably been eating a lot more at restaurants. If circumstances allow, I’m keen to cook for myself more next year. I also spent more on booze and other fun substances than I did on all my flights, which is slightly embarrassing. Beyond food and drink, I can’t see too much fat to trim.

I’m surprised by how little I spent on transport and travel. I think this is because I’m traveling increasingly slowly as time goes: Rather than rushing around like a blue-arsed fly, I usually max out my visa days in each new place, and try to fly between countries that are nearby to one another.

I actually would have met my goal if I hadn’t a) missed a flight, and b) had to pay for a bunch of medical tests and appointments. This will be an ongoing expense in future years, so I’ll just have to file it in the ‘shit happens’ basket.

It’s really hard to spend a lot of money in Asia and the subcontinent. My cheapest month came in at less than US$600, while living in the insanely cheap city of Chiang Mai. My most expensive month was US$1350 in Mumbai, living in a bougie neighbourhood with a cleaner and cook, etc.

All in all, it’s been a fun challenge. I’ll be living in more expensive parts of the world next year, so I doubt I’ll beat this figure, but it’s handy to have a baseline to refer to.

increase in net worth. I was expecting to eat into my savings, but ended up picking up enough writing gigs to keep my costs at bay, and even had a little something left over. The rest of the increase comes from some very tasty investing returns.

countries traversed, including visits to 33 cities and islands. I celebrated the New Year in Thailand, then headed off to Bali for a month of sun and surf, made new friends in India, hiked the Annapurna Circuit in Nepal, went back to Thailand to chill, made a couple of quick visa runs to Laos, went island-hopping in Malaysia, and closed out the year with my mates in Mumbai.

weight lost since the end of the pizza diet. I almost couldn’t get across the Nepali border because the immigration officer thought I’d stolen someone’s passport. I’ve replaced weightlifting with calisthenics, which fits in well with the travel lifestyle and is loads of fun. It has been strange readjusting to life as a skinny fella, but I quite like it.

of possessions. My ridiculously small daypack has been a great boon in terms of saving on money, efficiency, and forcing me to keep things simple. I swapped my trusty 22L Macpac to a friend in exchange for a 26L Osprey pack, but I’m eyeing up a new Macpac model for next year.

words written. A quarter have appeared here on the blog, a quarter were written for columns and freelance gigs, and the other half were spent on other projects. I’ve kept my promise to write a new blog post every second Friday, and learned a whole lot in my first year of blogging.

books read. Not the biggest total this year, but probably the highest quality of books I’ve come across. That made it really, really hard to pick out the best 10 reads of 2017, but I narrowed it down in the end.

months away from home. The solo travel life took a wee bit of adjusting to, but I still haven’t felt any actual homesickness. I swear I’m not a sociopath! I’m very much looking forward to visiting next year and catching up with friends and whānau, not to mention consuming vast quantities of New Zealand cheese and wine.

Life has thrown me a couple of curveballs this year, but it’s been thoroughly enjoyable and interesting nonetheless. A huge thanks to you for being a part of it, and all the best for 2018!

Great to hear you are fulfilling your dreams. We took our 3 daughters to Indonesia for 6 months – 6 weeks in Aceh province; several weeks in the other parts of Sumatra and then a base in Ubud renting a house. Our girls climbed volcanoes, hung out with orangutangs, learnt Indonesian, went to a school in the rice paddies, went to Balinese dancing lessons 3 times a week for 4 months, travelled to Lombok (at 6 & 8 our eldest climbed Mt Rinjani to the 2000 m point) – I got to work at a small school which was enough to pay for kids fees- all up a fabulous experience. We never scrimped and the cost was $26 000 including all our flights which was cheaper than living in Australia. Anyone can do it!

That’s so cool Jane! I’m always impressed when I see families hitting the roads for long stretches of time – would be such an amazing way to give kids a broader worldview and education.

Hello fellow traveler! It’s a pleasure to read about your experience.
Do you mind to tell me the new backpack modele you’re waiting from Macpack? I’m curious to check it out as I want to buy a new one.
Cheers mate & happy travels!

Hello friend! It’s all under wraps at the moment so I’m not allowed to say anything – sorry! However, I’ll post up a link and probably do a proper review once it’s out in the public. That’s probably going to be too late for you, but I hope you manage to find something good.
cheers,
Rich

I love living vicariously through your blog! All the data you’ve tracked this past year living abroad is so interesting. You inspire me!

Hey Becca, thanks for the kind words! I will do my best to live up to them

Sounds like a fantastic year! I love that you can live a great life for so little. I’ll be interested to read more about how your budget changes when you are no longer in Asia.
Well done n the 28% increase in net worth – a bumper year of saving and earning will do you well in years to come.

Thanks! I’ll repeat the exercise again in 2018 (it’s not even a chore, I geek out about this sort of stuff) and see how I go. I’ll probably manage to keep expenses low in the first half of the year (back to Thailand, then heading home to New Zealand) but not so much when I leave for the USA and central/South America (which is what I’m vaguely planning).

This is truly eye-opening. It sounds like you can have a great quality of life for much less than people expect. I’m also intrigued by the miscellaneous bribe. 🙂

Yeah! I think I’m at the point now that I don’t need very much to be happy, whereas most people would be horrified if they weren’t eased into it over time. Re: the bribe, let’s just say police in Bali must get a whole lot of tea money out of unsuspecting tourists…

Wow! It’s incredible how far your money goes in Asia. You may have missed your goal, but only spending $10,654 (while not depriving yourself) is still a very impressive feat.

Thanks! I’m pretty happy with how it turned out, although the crazy low cost-of-living did most of the work for me.