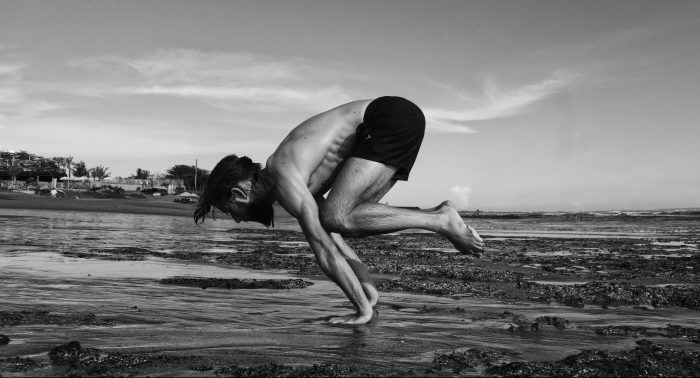 In 2016, I ate a stupendous number of large, deep dish pizzas, and published the results of my experiment in Sunday Magazine. One year later, the editor asked me to write a follow-up for the magazine’s ‘Body Issue’ about readjusting to life as a skinny guy. The web version of the piece can be viewed in its original form here, and is republished with permission (I wrote this essay last year, so pay no mind to the time references).

The immigration officer looks down at my passport, then studies my face again. I’m running a mild fever. I readjust my feet, which are slipping around my flip-flops on a sheen of black rubbery sweat. Authority figures always make me nervous. When I see a cop sometimes my heart catches in my chest, even if I’ve done nothing wrong. The ones in foreign lands with huge guns really get the foot sweat flowing.

This is not you, the officer says. It’s true – the clean-shaven, crew-cut, slightly pudgy face in the photo bears no resemblance to the scraggly scarecrow leaning in front of him, all sharp angles and facial hair. Yes it is, I squeak. There’s a long silence. I, uh, lost a lot of weight. How much? he asks. Almost 20 kilograms. He tilts his head. You got sick? Uhh… no.

I rack my delirious brain, and try to figure out how to explain.

When I left New Zealand, there was a lot more of me crammed into the cattle class plane seat. I’d just completed 222 days of eating large, deep dish pizzas; a stunt to prove that calorie balance is king and there’s no such thing as inherently unhealthy food. I weighed in at 86kg, the heaviest I’d ever loaded my naturally skinny frame, and was stronger and leaner than before, with lower cholesterol to boot. The moment in which I dropped any pretensions of being a serious business journalist was immortalised in a naked cover shoot for this very magazine. My friend’s mum cut it out and put it on the fridge.

After touching down in Bangkok, I went out for a drink in a local neighbourhood. The bar staff avoided me until a Thai friend broke the ice. They were scared of you, she laughed. This was annoying, in that I was hanging out for a beer, but also kind of a rush. I’d never felt like a big guy in Auckland – the largest Polynesian city in the world, where one of my gym mates tipped the scales at 180kg – but I was half as big again as most of the Thai people.

Of course, the ego trip was short-lived. The human body is a ruthlessly efficient manager, shutting down any departments that aren’t pulling their weight, and my softening muscles were soon put out of commission. I performed an incredible vanishing act worthy of Houdini himself, shedding a kilogram every week during the first few months. While I’d carefully planned and curated my travel wardrobe, I soon resembled a nine-year-old playing dress-up in his dad’s shirts. Everything had to be replaced, although I drew the line at my precious merino wool undies.

Today I weigh 67 kilograms, which is the lightest I’ve been since high school. My beloved undies are so baggy I have to flip the waistband over three times to keep them up. I didn’t actually intend to get to the point where you could play my ribs like a xylophone – it happened entirely by accident. Male backpackers who’ve been on the road for a long time always get skinny, although they gain the equivalent in hair, nipple piercings, and beaded ankle bracelets. You get relaxed about meals – sometimes one or two, three on a good day. A few bouts of Delhi belly help matters along. Mysteriously, the ladies often put on a few pounds, but the blokes shrink.

And so my body marched inexorably towards its natural set-point, which it hadn’t seen for a decade. Losing weight is the easiest thing in the world for me. It’s gaining it that’s hard. As a chronically skinny kid, I’d started dabbling with weightlifting around my first year of uni.

The challenge and camaraderie meant it was never a chore to hit the gym. I loved getting stronger, hitting new goals, and watching the dial on the scale climb higher. I won my class in a novice powerlifting meet, hoisted logs and sandbags in a strongman competition, and opened really tight pickle jars for my mum.

Now I’m a shadow of my former self. My friends came over to visit and mocked me mercilessly about my striking resemblance to Christian Bale in The Machinist. I found it funny. I was pleasantly surprised to discover I was OK with being a smaller man. With the angsty teen years long gone, physical insecurities have continued to fade away. I don’t much care what I look like, and get kicks out of riling people up with stupid haircuts or terrible fashion choices. I want to be ashamed only of the things that are worth being ashamed of.

Wearing an ‘XL’ shirt was cool, but ‘M’ shirts have their advantages too. The other day I explored a magnificent 400 year old Indian step well after squeezing through a gap in the fence, and had it all to myself.

I’ve been criss-crossing the subcontinent on sleeper trains, sharing tiny, claustrophobic berths with my travel buddy (whom I would have smothered at my former weight). But the biggest relief by far is the eating. When I have a meal, it’s because I’m hungry, not on a schedule to cram in 4000 calories. In hitting my daily protein targets I was responsible for the misery of God-knows-how-many animals, but I don’t really eat meat or eggs any more.

Embracing my inner skinny guy doesn’t mean I’ve abandoned my interest in health and fitness. It only took a few months of unbridled hedonism before I felt the old, familiar itch. Lately I’ve been learning calisthenics; bodyweight exercises which focus on strength, flexibility and skills. It’s all about manipulating your body through space, so the lighter you are, the better. I haven’t set foot in a gym or counted a calorie for more than a year. I can touch my toes, I’m injury free, and I can still open quite tricky pickle jars.

Say No to Gravity, Kids

I want to tell the immigration officer all of this. I want to tell him about calisthenics – maybe bust out a handstand – and explain about the pizza diet and the horrors of factory farming and the body’s relentless drive toward homeostasis, but I can’t speak Nepalese and there’s a queue behind me and it’s one in the morning and I don’t want to slip over and break my neck in a pool of my own foot sweat.

Instead, I just stare.

Take your hat off, he says. I flip off my cap, too quickly, and clutch it in front of me. We look into each other’s eyes for an uncomfortably long period which might have been aeons or might have been six seconds. His face is imprinted in my mind; hazel eyes, aquiline nose, glossy black hair parted down the middle. My fever-brain warns me that if we maintain eye contact any longer we will be destined to become lovers. Whatever he’s looking for, I guess he finds it. He gives me a slight nod of understanding, stamps my passport, and waves me through. My feet are dry in no time.