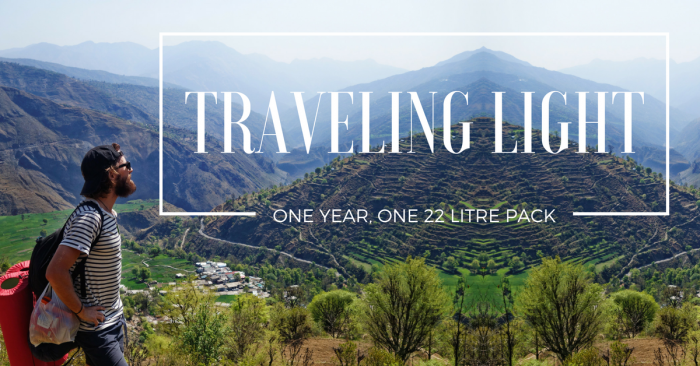 “This is my proper bag.”

I’ve had this conversation more times than I can remember over the past year, confusing countless cab drivers and bamboozling bevies of backpackers.

It’s officially been one year and one month since I quit my job and moved overseas. Before I left my home country, I got rid of all my stuff, until what was left could fit in a 22 litre daypack. I’d read about people traveling ultralight, and thought it sounded like a fun thing to try.

My little bag has since taken me through seven countries, including a hike through Myanmar, treks on both the Indian and Nepali sides of the Himalayas, and a motorcycle loop through northern Thailand, among other adventures.

It’s held up brilliantly, and I’m totally sold on the concept of ultralight backpacking (although I will make a small change – see the end of the post).

Here’s why traveling light is so great:

This has saved me probably $400 or so over the last year, although money’s not even the biggest factor. Standing cheerfully in line might be the British national sport, but that’s where my colonial heritage ends. I’m allergic to queues, sitting in traffic and other such soul-crushing activities, so not having to check a suitcase is a godsend.

Most airlines offer online or self-service check-in kiosks, so you can turn up just before the flight, head straight to security, and onward to boarding.

First one through immigration

Once you touch down on the other side, there’s no waiting around at the baggage carousel. Instead you whisk straight through to Immigration, which can get bloody hectic if there aren’t enough staff or several flights arrive at once. When it’s 2am and you’ve been traveling for 24 hours straight, beating the mob is enormously satisfying.

Even the most incompetent airline has no chance of losing my bag, since it’s always on me. This is one of the reasons I’ve opted for only the most basic travel insurance (the other being that I don’t own much of value).

Some people stagger around under packs bigger than their actual bodies, with all the grace and mobility of an arthritic turtle. They often end up taking cabs and tuk-tuks everywhere, which seems sort of contradictory to the whole concept of a backpack. I like walking, especially in new cities, so I try to go on foot when the hostel is only a few kilometers away.

You have to applaud the ingenuity of the thieves in this neck of the woods. On overnight buses, stowaways squeeze into the luggage hold under the bus and systematically go through everyone’s bags, like some sort of low-rent Mission Impossible. On trains, baggage left out in the aisle meets the same fate.

My bag is small enough that I can tuck it under my seat, or spoon with it in bed on a sleeper train. At airports, it’s a makeshift pillow for taking a nap. When I stay in hostels, it fits inside even the smallest locker, so I don’t have to leave it out in the open.

I’ve seen too many backpackers swallowed whole by their monster 80L packs, tumbling into the gaping maw while rummaging around in search of a hairdryer. The smaller your bag, the easier it is to find stuff, and the less chance you’ll get lost inside it and starve to death. 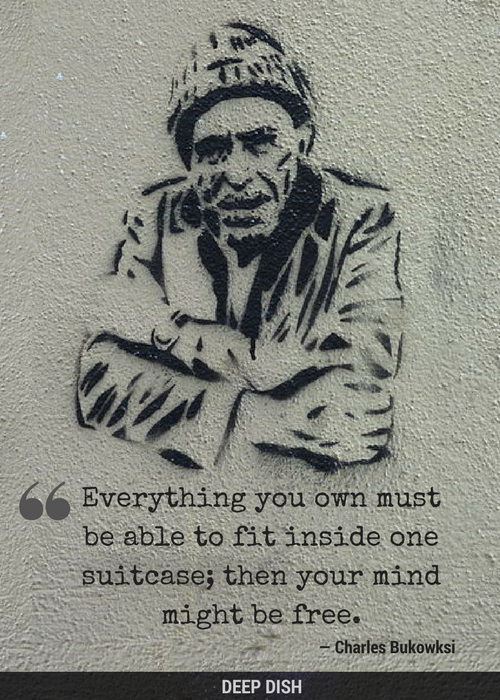 I’ve spent about half of the year on the road, and the other half living in Chiang Mai on the cheap. The domestic life has necessitated picking up a few bits and pieces for my apartment – cleaning supplies, linen – but fundamentally, everything else has to fit in the bag. This might be the biggest benefit of all: It’s a handy constraint that forces me to be mindful of my stuff, and scrutinise every new item I bring into my life (UPDATE: here’s my packing list).

After rattling off all those benefits, I’m going to stick with my 22L bag forever, right? Nope!

There are a few extra bits and pieces that I really want – some camera gear, a portable speaker, a third pair of undies – but I’m already bulging at the seams. I could stick with the day pack, but it’d just become some holier-than-thou masochism, at the expense of my actual comfort.

This is the trap that the hardcore minimalist types fall into. It should be about efficiency, and living with the right amount of stuff to maximise your happiness – no more, and no less.

I reckon anything that falls within the carry-on limit is the way to go. That gives you all of the benefits listed above, without having to wear the same undies inside out and back-to-front. 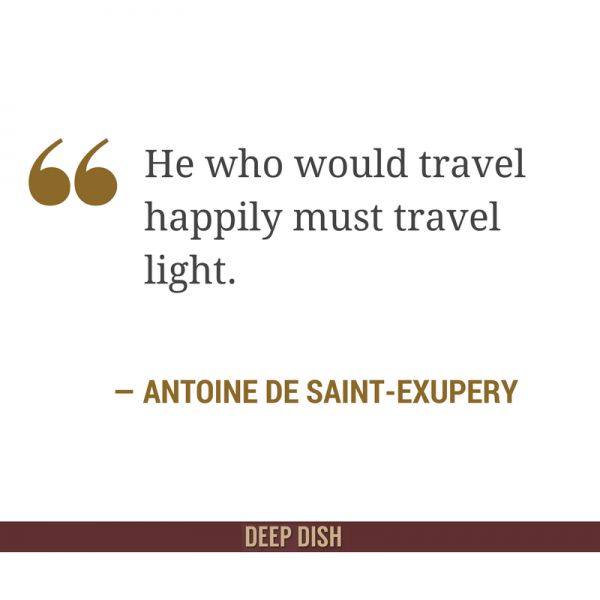 I’m currently eyeing up the Osprey Farpoint 40 pack, and will retire my trusty Macpac Kahu 22 soon.

Normal people probably think traveling with carry-on only is weirdly restrictive, but it’s going to be super luxurious for me. Airlines allow up to about 45L, which is double my current capacity. Most will let you take one handbag or laptop bag too, which stretches it even further if need be.

What to do with all that precious space? If I go mad and start filling it up with elephant pants and Buddha statues, you have my permission to slap me silly.

Observant readers will notice I haven’t mentioned what items actually do make it into the pack. Since writing this post, I’ve managed to get my core packing list down to fewer than 50 items. You can check out exactly what does and doesn’t make the cut here.

I came back from my first trip to Bali with literally five or six pairs (only one of which I ever wore). Lesson learned!

Good post. I love the idea of travelling light, and I have done it in the past. I now travel and work remotely a lot and could go hand luggage only – apart from suncream. My partner and I spend a lot of time in Bali, and suncream is so expensive here that if I’m in Bali for more than a month or so, it’s cheaper to pay for checked luggage and bring 6 or 7 bottles of suncream from home than to travel light and buy it here! Any suggestions?

Hey Ian, thanks for the comment. My mind is blown at how much sunscreen you guys must be using! I stayed in Bali for a month this time last year and don’t think I would have used more than one small bottle, although perhaps the skin cancer will catch up with me later. There’s definitely a few bits and pieces that’s it’s cheaper to bring from home – ladies often find it hard to get tampons in some countries, for example. For me, those sort of costs are a tiny price to pay for all the other benefits of ultralight travel, and don’t even come close to outweighing them. For other people (perhaps yourself?) the equation may just work out differently!

Just catching up on all your posts, Rich! I had the Farpoint 55 (im pretty sure its just the 40 with an extra 15 small backpack attached), it was the dream. I still use the smaller one everyday. Hope you’re all good! Eve

Hey Eve, great to hear from you. I ended up getting a new pack from the same company, definitely keen to check out the Osprey bags at some point though because everyone raves about them. Take care pal!

I went through Mexico for six months with the Farpoint 40 (still running my business while travelling) and I’ve used it numerous times since coming back to NZ. It’s pretty much perfect. The only caveat is that for some reason the laptop sleeve is in the outermost compartment instead of up against your back, where it would make the most sense from a weight perspective. Having said that, it worked fine in practice.

I researched for months before buying, and after two and a half years with the bag I still think I made the correct decision.

I’m a big fan of the Farpoint 40! I was considering buying it when I found it for half price at an REI Garage Sale, new with tags. It was in the Garage Sale because they’d lost the shoulder strap to carry it single-shoulder style, which I’d never do anyway. I’ve used it on several trips, up to 10 days, with no problems whatsoever – and I’m not even that minimalist yet! Highly recommend.

Nice deal! Cheers for the recommendation mate, I think I’m more or less decided on the Farpoint now so looking forward to the upgrade.