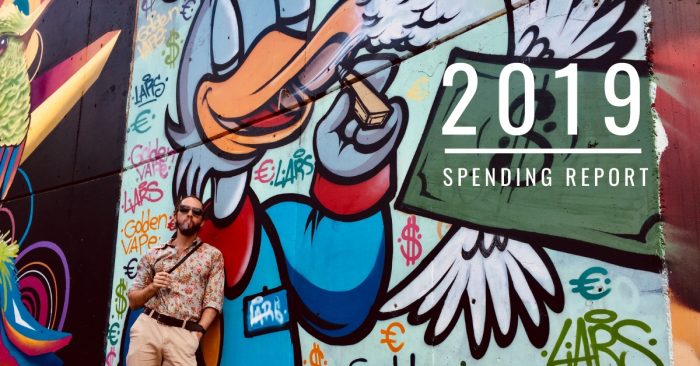 You start out as a little wisp, subsisting on two minute noodles and tinned tuna, riding the bus, counting the change in your pocket.

Then you get your first proper paycheck, and the constraints evaporate. You enter the world of grown-up spending. You can have dessert for breakfast, and breakfast for dinner. No more sneaking items into mum’s trolley at the grocery store. You can have anything you want, any time you want. And so… you do exactly that.

“I work hard, so I deserve to treat myself.’

Oh, you got a pay rise? Time to upgrade the car. Scored a year-end bonus? Be sure to spend every cent before it lands in your account.

This is called ‘lifestyle inflation’, and it’s the main reason why rich people are so poor.

I have historically been pretty good at resisting lifestyle inflation. I always kept my spending a few levels behind my income, and pocketed the difference.

But 2019 is the year that I finally succumbed. I let my hair down, loosened the purse strings, or as they say here in Colombia, tiré la casa por la ventana.1

I know this to be true, because I’ve kept up my practice of tracking every dollar, dong, and peso that leaves my pocket. There’s nowhere to hide: the annual total is blazing a furious red on my spreadsheet right now.

Well, time to hand in my frugality card. Expenses jumped 38 per cent in a single year!

…or perhaps not just yet. I spent most of the year in the Americas, including three of the most expensive cities in the world, which was a shock to the system after so much time in Asia.

It’s only fair to separate this out. After doing some very technical analysis, I calculate that my lifestyle has inflated by 1.25x this year.

Not quite as bad, but still a big leap. This was the year of becoming a Fancy Bitch.

Honestly… I’m kind of into it.

I started to notice this back in March, when I wrote the Barbell Strategy for Buying Quality Stuff:

After hitting peak pathological penny-pinching circa 2016, I’ve slowly but surely learned which things are worth paying money for. Sometimes, a lot of money. At first I found it hard to reconcile my growing taste for nice things with the frugal ethos. But there isn’t necessarily a contradiction here.

There are two categories of things worth paying top dollar for: anything with a risk of ruin, and anything you use every day.2

In the spirit of encouraging my fellow tight-asses to relax their sphincters a little, the three best things I bought this year were:

So much better than a bulky wallet, and it only cost eight bucks or something

Shortly after the purchase, I met a guy who’d had his pair for 5 years and they still looked good (actually, even better than my unscuffed new ones)

Super portable for stretching, bodyweight exercises, and progressions of some harder calisthenics moves

A slight stretch, but I’d extend the ‘stuff’ framework to accommodation: you use it every day, and your physical environment is arguably an extension of your mind.

For the last six months I’ve rented a proper apartment, instead of a shoebox studio. The main advantages have been having a kitchen, an exposed beam to hang my gymnastic rings, and a general feeling of being house-proud.

This last reason is the least tangible, and the most unexpected. Buying quality stuff is really just a subset of this underlying trend: for the first time in my life, I’m developing a slight glimmer of appreciation for aesthetics.

I used to think aesthetics were a meaningless waste of time. Fashion was for beautiful morons, bodybuilders were vain and insecure, people who ‘appreciated art’ were smooth poseurs, and minimalism was just another pissing match for the insecure middle classes.

Now I can see I was hilariously wrong—like a colour-blind man scoffing at the concept of ‘red’.

Why? Aesthetics are never entirely divorced from underlying value systems. They reify and reflect the things that are important to us. Minimalism is absolutely a pissing match, and sometimes borders on parody (the framed photo of a single chair in an all-white room, etc). But it’s also an instantiation of values that are important to me: frugality, simplicity, and conscious consumerism.

And you have no choice in the matter. Unless you actively curate or create your own aesthetics, then you’re being worked upon by someone or something else—usually a corporation or government. Better to shape your own physical environment.

Then there’s the fact that everything is interesting. From the outside, most aesthetic-based movements look boring and pointless, like the Emperor’s New Clothes—there’s no ‘there’ there! But that’s because they really do require something like a second sight: you have to develop a tiny bit of competence and understanding in order to appreciate what’s going on.3

This is one of those shared universal experiences that aren’t. Clearly, some people have a strong sense of aesthetics from day dot. I guess that makes me a late bloomer, but I’m getting there.

One of my personal highlights this year was redesigning this blog to create lots of space, and remove visual clutter. It made me feel calmer and less squeamish about posting personal stuff online. More simply, it ‘sparks joy’ (I maintain that Marie Kondo is a genius and this is one of the best life heuristics ever).

In short: I am really enjoying this Fancy Bitch transition, and pulling back a little from the most utilitarian form of frugality.

So, this current level of spending seems about right for me. But if I say the same thing next year—my lifestyle inflates by another 1.25x, and now this new number magically seems like the sweet spot—boy, that sure would be awfully convenient!

To prevent this from happening, I’ll pre-commit to publishing my spending numbers again in 2020, so that y’all can shame me if necessary.

Here’s another look at the numbers, in graph form: 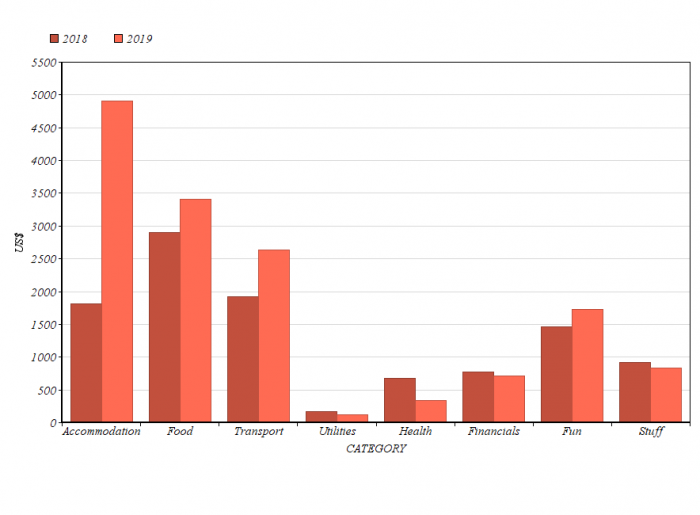 Interestingly, I spent less money on ‘stuff’ than last year, which doesn’t fit my intuitions. And only a little more on ‘fun’, with almost all the difference coming from accommodation/flights.

This suggests to me:

a) it’s possible to improve life satisfaction without spending a lot more money, and

b) my habits are pretty much dialed-in at this point, to the point where loosening my belt a few notches didn’t make much difference. Huh.

increase in net worth. After all my harping on about this all-important number, I’ve run into a weird edge case: my net worth has been rendered near-meaningless by the fluctuating paper valuations of a couple of illiquid early-stage investments with highly uncertain prospects. But at least things are looking good on paper!

countries traversed. I celebrated the New Year in Thailand, spent a couple of months by the beach in Da Nang, made a short trip home to New Zealand, visited friends in Vancouver, Portland, and NYC, spent the summer in San Francisco, then settled down in Medellín, Colombia towards the end of the year.

books read. A big drop from last year, but plenty of good stuff.

My guess is that I spent a lot less time reading, and more time processing all my notes and writing.

productive hours. I was at my peak towards the end of the year, when my buddy Josh came to stay with me for a work-a-thon, and at my most slovenly during my North American tour: 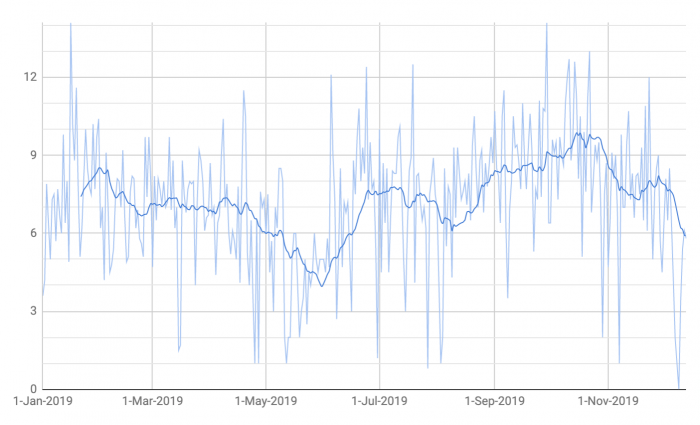 words written. Of which, ~10 per cent appeared here on the blog.

The rest included columns, a little bit of freelance journalism and copywriting, and some personal writing, but the bulk of it went towards the eternal book project.

As always, please be sure to discount any and all posts from me as a friendly Internet stranger’s carefully-curated filter on reality. This was a year with all sorts of frustrations and low points that you will never hear about, except through oblique and entirely bland disclaimers like this.

But on the whole, it was ridiculously good and interesting! And in a surprisingly large way, you played a part in that. Yes, you. I’m looking at you fondly through your webcam right now; you should probably cover it up with a bit of sticky tape.

I’ll start collecting hard numbers on this next year, but I’m pretty sure the emails, comments and real-life interactions I have with Deep Dish readers are my number one source of amusement, inspiration, and gratitude.

Hi Richard, I’ve been following your blog for about 2 years and have been tracking my networth for about 18 months with good results and it really made me focus on saving vs spending and I’m relatively frugal, despitennot knowing what I spend.

I’ve not been able to find a post about it, but if I’m wrong forgive me. But how do you track your own expenses? Is it an app or as simple as taking a highlighter through your statements and transcribing to a spreadsheet?

My aim is to save approx 60% or my net income, but this figure is totally arbitrary and solely based on an online calculator that predicted I would have enough saved for ‘financial freedom’ in 10ish years.

I have no real idea how much I’m spending, so it’s difficult to know how much I can max out and save. Over the past 3 years I’ve had decent bumps in salary due to moving companies, but I need to protect against ‘lifestyle inflation’ as it’s too easy to justify splashing out. Thanks Tony.

Hey Tony, congrats on tracking your net worth and getting good results out of it! You’re right, I haven’t made a post explicitly about expense tracking yet, but I do think it’s a really useful exercise.

There are a bunch of apps and programs out there that automate this by scraping your bank transactions, but I (deliberately) do it in the most labour-intensive way possible: each evening, I write down my spending for the day in a spreadsheet which collates monthly and annual totals in each category. The idea here is that it forces me to eyeball every item, whereas a more automated system wouldn’t.

With that being said, I think it’s a bit mad to do that every day for a whole year (I only do it because I am weird and actively enjoy that sort of thing). I usually suggest to people that they try it as an exercise for a month or two, until they have a better picture of where their money is going.

There are probably some great apps out there, but I have no idea what to recommend since I don’t use them – if you want a copy of my labour-intensive spreadsheet, let me know.

Where will it end??

It’s a slippery slope from here to multi-ply toilet paper and owning more than one coffee mug.

Hi Richard, thanks for all your articles. Very inspiring. How did you spend so little on international travel in 2019? This is very intriguing. Lee

Hi Richard, inspirational budget, puts my spending to shame. What are timberlands?

Thanks Em c! They’re a brand of quality outdoors/waterproof/work boots.

Hey Lee, no worries. The flexibility of my schedule means I’m often able to pick my flights based on the cheapest timing, and don’t have to plan too far ahead: in my experience, the best window for longhaul flights is about two to three months out. I’ve written up a few more thoughts here.

Thank you for the article, Budget Buster. Appreciate it!