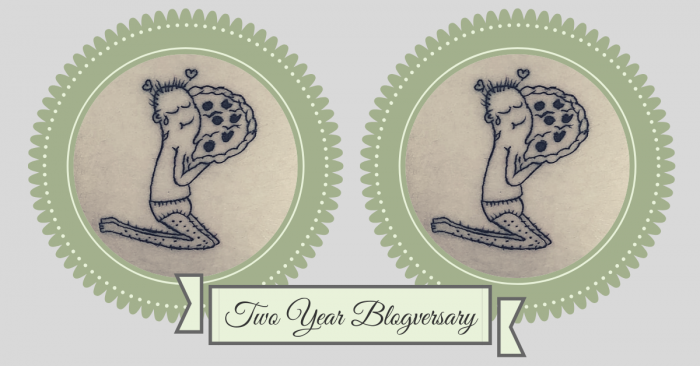 The blog has entered the terrible twos! In keeping with last year’s tradition, here’s a quick status report, a little housekeeping, then a look ahead to some new projects coming down the pike.

A few long overdue design updates: there’s an actual home page now. Check it out. And proper category pages, among other things. Try to contain your excitement!

(Note: Being a masochist and a firm believer in the DIY approach, I didn’t hire a developer, so any bugs you notice are 100 per cent my fault. That being said, I only broke the site three times and sent one desperate cry for help to my tech-savvy little sister, so I’m cautiously optimistic.)

Rather than leave comments here on the blog, most people message or email directly after each new article, at a ratio of something like 10:1. A lot of the messages are thoughtful and interesting, but I’m the only one who gets to enjoy them, which seems like a shame.

I’m thinking of closing comments on the blog so I don’t have to deal with spammers and such, but I’m on the fence. Should they stay, or should they go?

This year, you have written me to share your triumphs and woes, to swap recommendations, to challenge my thinking, and to invite me into your homes for fine seafood dinners. I’ve had the privilege of meeting several readers in real life, and corresponded with many more. In fact, I just realized that some of my closest confidants are people I’ve met through the blog, which is pretty trippy.

My favorite messages of all are the success stories:

…and many more people making inspiring life changes in the realms of money, travel, entrepreneurship, reading, and downsizing possessions. Thanks to everyone who has written in. I love hearing these stories.

Alas, every rose has its thorn. As the site has grown, I’m also getting an increasing volume of messages like this: 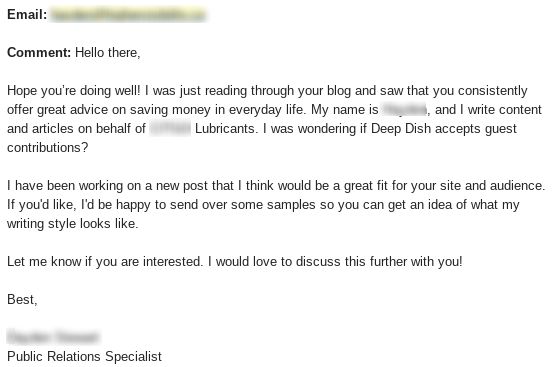 Just like a lubricant sales dude to slide into your DMs uninvited! This one, however, might be my all-time personal favorite:

Some of these solicitations come with sordid offers of filthy lucre. The Deep Dish is firmly against dumb consumerism and in favor of journalistic integrity, so I take great delight in casting these sort of pitches into the fiery pit of the spam folder.

There’s no way I’m going to sell out and let Big Lube grease my palm, because  uh, it’s wrong. Advertorial and ‘sponsored content’ is a slippery slope. As for ads, I don’t want to run them unless I absolutely have to, but I’m at a bit of a crossroads.

Where to From Here?

I love researching and writing articles, but it takes a lot of time and brain juice. Typically, 10-20 hours per post. I said I’d write two per month; I haven’t always managed it. I feel compelled to maintain a respectable income stream, so I still do some freelancing and consulting work. More time spent there = less time spent here.

UPDATE: I pulled the page down in June 2019. I might open it up again once I feel like I’m adding enough value/producing posts consistently. Thanks a lot to everyone who got behind it.

This is an experiment, like anything else, but here’s what I’m hoping to achieve:

The exciting announcement is that I am researching and writing a book. The working title is ‘The Book’. Hopefully I’ll come up with something catchier before it goes to print. It encapsulates everything I’ve learned in seven years of writing about money, behavioral economics, and psychology.

This is far and away the most ambitious project I’ve ever tackled, but it’s also the most satisfying. I’ve been plugging away for almost a year already, on and off. It’s taking me forever because I want it to be really good, and there are only so many hours in a day.

The more support I get, the faster it will enter the world. That might be by the end of this year, if I work my little butt off, or it might be later in 2019. It’s up to you! And when the time comes, patrons will be the first to get their hands on it.

Don’t you dare even think about contributing a cent unless you’re debt-free, and generally have your financial shit together. But if you’ve got some value out of my writing and resources, and want to help me step up my efforts, I’d be honored to have your patronage. The suggested tier is $2, which buys me a metaphorical cup of coffee, which I will then quite possibly use to buy a literal cup of coffee, which will make my brain less slow, which will cause more words to appear on this page.

Thank you to all the fantastic people I’ve met and corresponded with this year, and, hell—since I’m feeling generous, here’s to all the hard-working lubricant salesmen too!

I look forward to the book. I really enjoy your more thoughtful pieces beyond pure financial topics. FI is not really about money at the end of the day and topics like happiness and law of attraction are fascinating.

The only thing missing is a post on beards…..

Good to know, thanks Aisling. Totally agree about FI. Money is only a means to an end, so writing about it on the object-level increasingly feels boring/missing the point. Beards, on the other hand, are endlessly fascinating!

Keep the comments open. Excited for the book-i’m sure it will be a great read

Thanks! The people have spoken; comments are gonna stay open.

Stay.
Can you get me some lube, errr..its for a mate.

Anything I can do to advance the noble project of living in a well-lubricated world.

Stay. Route some of your offline discussions to the comments section. Some of the best information you can get out of a blog entry or article come from fruitful comments.

Agreed. A couple of my favorite blogs have comments section which are often even more interesting than the article itself.

I suspect you’re pushing the Patreon so you can buy this: https://www.amazon.com/Passion-Lubes-Natural-Water-Based-Lubricant/dp/B005MR3IVO

holy shit I need this in my life

Thanks Becky. Leaning towards keeping comments now, standing firm on the lube ads!

I say keep the comments, unless spam control, even properly automated, still takes too much of your time.

Congrats on semi-regularly posting for a whole two solar revolutions.

The filter does a pretty good job, there’s just the odd one that slips through. I also thought there was some security risk associated with open comments, but after a bit more googling I don’t think that’s the case.

Thanks Cal. Better to reign in hell than serve in heaven!